Where to buy the iTrac II.

The iTrac II can be purchased from the Pacific Prawn Fishermen's Association through J. O. Thomas and Associates, call (604) 291-6340 for information regarding pricing, purchasing, registering along with air time cost.

Upon ordering the iTrac II unit, it will take two business days to configure and test before shipping.

Where to buy a wheelhouse set and haul switch.

The wheelhouse set and haul switch is no longer available for purchase from J. O. Thomas and Associates Ltd.

However, the switch can be purchase from Delcom Products, www.delcomproducts.com, part number 706502-F-5M, USB HID Programmable Dual Button Switch w/5M Cable and Flange. Provide the following information to Delcom when placing your order. 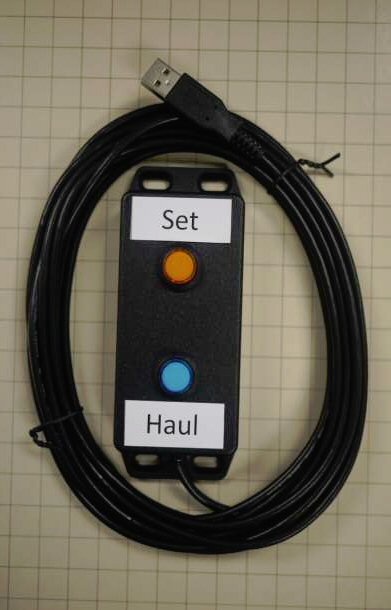 For information on installing downnload the

Is there an installation service for the iTrac II.

No installation service is provided, most fishers install the iTrac II themselves, alternatively, contact the local marine electrical service cente

How to use the iTrac II without a computer or if the computer is not working.

The panic button on the iTrac II wheelhouse unit can be used to send Set and Haul positions.

Note, once the panic button is pushed the Satellite and Message LEDs will flash or stay on until the position is transmitted. Set and Haul positions sent using the panic button are irretrievable for review.

How to activate unit for the fishery.

When the seasonal air time cost has been paid, J. O. Thomas and Associates will activate the unit prior to the start of the fishery, no action is required by the fisher.

Where to send unit for repair. 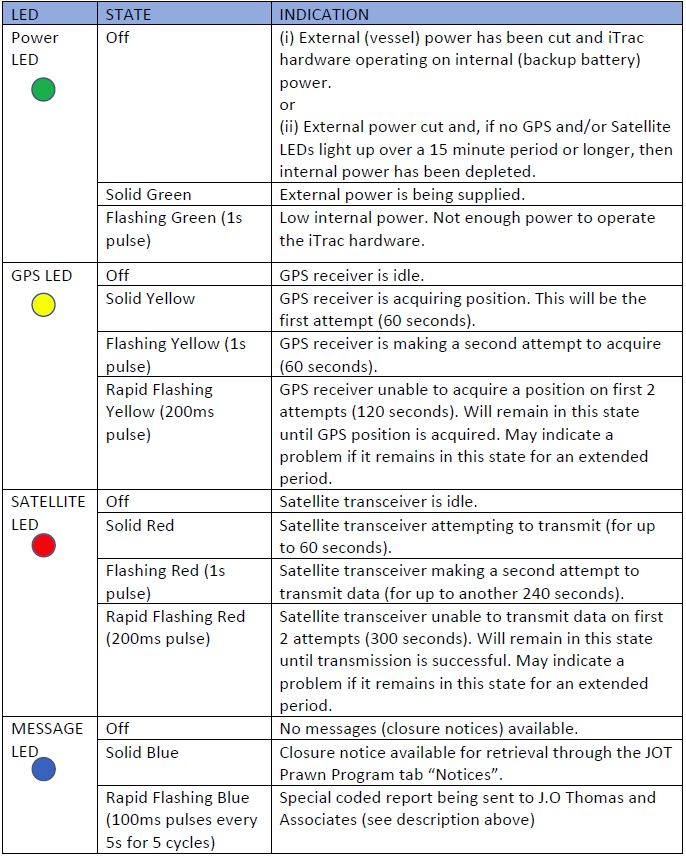 What voltage is required.

The iTrac II requires a continuous DC power source that is between 9 and 32 volts (supports 12V and 24V battery systems) (red wire to positive and black wire to ground).

How long does the battery last before recharging.

The battery in the iTrac II wheelhouse unit will last approximately 12 hours.

Is an external fuse required.

The internal fuses are re-settable fuses so in the event of a fault, the circuit is disconnected temporarily. The iTrac II would operate from the internal battery during this period provided it has sufficient charge. If it's an extended fault, then the device would stop working eventually. Once the fault is corrected, the fuses should reset and continue to function.

If a secondary battery is connected to the Wheel House Unit, the external fuse should be sized to accommodate the charging current to this secondary battery. This will depend on the battery used but upwards of 6 - 10 amps would be recommended.

What is an IMEI number.

The IMEI (International Mobile Equipment Identity) number is a unique serial number assigned to each iTrac II, labeled on top of the remote terminal unit. The IMEI is required (as the CSP No. and Hardware Serial No.) when registering the vessel to Fisheries and Oceans using the

How to use another satellite provider.

JouBeh warrants products manufactured by JouBeh to be free from defects in materials and workmanship under normal use and service for twelve (12) months from the date of first activation, unless specified otherwise, subject to the following conditions:

JouBeh’s obligation under this warranty is limited to repairing or replacing (at JouBeh’s option) products that have been returned prepaid to JouBeh. JouBeh will return warranted equipment by surface carrier, prepaid. This warranty shall not apply to any JouBeh products that have been subjected to modification, misuse, neglect, accidents of nature, or shipping. Batteries are not warranted. Under no circumstance will JouBeh reimburse the claimant for costs incurred in removing and/or reinstalling equipment. This warranty, and JouBeh’s obligation there under, is in lieu of all other warranties, expressed or implied, including warranties of suitability and fitness for a particular purpose. JouBeh is not liable for consequential damages.